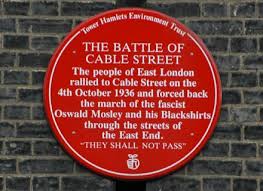 I’ve been asked to write a blog about our song ’Love Your Neighbour’. This is my third attempt.

Fear is everywhere. It is fed by the media who rarely tell us what we will find encouraging. It festers and grows within us, blocking out what is good and true.

And fear breeds alienation and hate.

I learnt recently that we go through behavioural cycles every four generations; apparently, popular culture tends to repeat itself every eighty years (Strauss and Howe).

Well, with that in mind – in 1939, Germany invaded Poland. This was the year that we look on as the beginning of the Second World War and a time of atrocities throughout the world that is hard to consider without shuddering. But actually, German fascism, with it’s accompanying trend for violence and hate, started some years before that in 1933, when the National Socialist German Workers Party (Nazis) took control of pretty much every aspect of life, both public and private, throughout Germany.

The thing that came as a shock to me, was how much closer than might be expected the UK came to fascism. Oswald Mosely and his British Union of Fascists provided our own answer to the violence of Hitler’s Brownshirts, with the BUF youth movement, the Blackshirts. The Riots of London’s Cable Street in 1936 bore food for thought, as the Fascists, in uniform, marched confrontationally through the Jewish Sector chanting slogans and violently opposing all who stood in their way. Fortunately, in a rare move, the communists, anarchists and labour parties all stood together with the Jewish community, building multiple barricades, and, despite the extraordinary apathy of the Metropolitan Police to the violent behaviour of the Blackshirts, the March was eventually foiled and abandoned.

So, here we are eighty one years on. We look back on those appalling years of the holocaust with horror; and yet our newspapers are full of stories about the extremism of today, and we seem to be oh so ready to take the bait and let our hearts be filled with the fear and hate that so nearly prevailed then.

Steve Stone is pastor of the Heartsong Methodist Church in Memphis, Tennessee. He learned that the Memphis Islamic Centre had bought some land adjacent to the church, and were planning to build a community centre and a mosque.

Unlike so many in the US Bible Belt, Steve decided on an approach of love; instead of objecting to the plans, his church put up a large sign that said: “Heartsong Church Welcomes Memphis Islamic Center to the Neighbourhood.”

First of all, there was astonishment from the Muslim community. This led to heartfelt gratitude and, ultimately, friendship. Over a period of time, a bond developed between the two churches of love and tolerance, which at the time of the Ramadan Festival, when the Muslim community centre was still not built, led, in an unprecedented move, to the Muslims being offered use of the largest room in Heartsong Baptist Church.

The friendship between the Christians and the Muslims in Heartsong is ongoing. Now, when the church has a barbecue, they serve halal meat, so that Muslim friends will feel welcome. Joint projects are planned, friendships forged, doors and hearts opened so that God can really work.

On hearing about the story, CNN arrived to interview the Muslims and Christians in Tennessee, and an item about the co-operating communities was broadcast on the CNN Global News Service and seen all over the world.

7500 miles away, in a small community in Kashmir, a group of astounded Muslim men saw the news item. Having believed that all Americans hated them, and were against Islam, they sat in amazed silence. “How can we try to kill these people when they welcome us like this?” One of them was so touched by the love of the Christians in Tennessee that he went straight to the local church in Kashmir, and cleaned all the anti-Christian graffiti off.

Steve Stone was at home when he received a phone call from Kashmir. A man, who he had hitherto never spoken to, told him they had been watching CNN when the segment on Heartsong Church was aired. He gave the undertaking that, following the expression of love from Heartsong Church, this community in Kashmir would, in the same way, take care of their own Christian community.

Loving can be hard, it can mean going against the grain, both in terms of what our neighbours and friends think, and in terms of how our own desires and instincts feel. It begins with asking God to take our anger away whenever we are slighted or injured, and pervades every facet of our lives. In this age of an ever shrinking planet we need to bear love in mind when me make decisions about the clothes and food we buy, the newspapers we read, the electoral parties we vote for, right down to the things we say and who we’re prepared to sit next to on the bus. Being loving involves both risk and commitment in so many ways.

I leave you with a quote from a man who had every reason to live in fear … Martin Luther King:

“Love is the only force capable of transforming an enemy into a friend.”

When I was a child, I was taught that love doesn’t make the world go round.

But actually, I suspect that it does.

3 thoughts on “That “love thy neighbour” thing – I meant that…”