Been to a good GIMF lately?

A few years ago, I learnt, for the first time, what ’GIMF’ stands for. It is a slightly despondent term, coined by musicians, who have just turned up for a booking to play at on open air concert, to find that it’s raining hard, and has been doing so for several days.

Well, this weekend, we are at the Wychwood Music Festival, not playing, just enjoying the ambience. And the mud.

We have been coming to this festival with some good friends, Helen and Simon, for the last three years. Both families come, armed with children (all boys) and camper vans, we park up next to each other and then we watch, as the weekend progresses, how our children get muddier.

There are certain routines that have to be adhered to – on arrival, the children are sent off to play cricket, football or whatever else takes their fancy, while their beloved parents build the tents to offload the boys into. This has to be done smoothly and efficiently so that the men look as though they know what they’re doing; it is essential not to have obvious marital rows while doing the job, so, regardless of how remarkably stupid the loves of our lives are being in carrying out perfectly simple, clear instructions, we continue to call each other ’darling’, ’my love’, ’honey’ etc., only with a notably different edge in the voice and a slightly higher volume than  might normally be expected. Once the tents have been erected, bedding emplaced and boys duly installed, we can sit back briefly, and listen to other families putting their tents up with the same, slight increase in family tension as we experienced.

Further traditions include the donning of ’the festival hat’ by our friend Simon; he normally holds down an extremely senior job in the police force, but, I promise you, when he wears that hat, his IQ goes deep undercover. 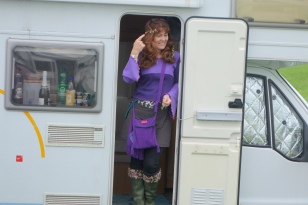 His wife, Helen, who is a bit of a hippy when given the chance, puts on her festival garland, mismatched skirt and leggings. The garland was actually purchased four years ago, so she always feels vaguely guilty as she walks past the garland-selling-stall who are, no doubt, hoping to sell new ones, rather than have them recycled so effectively; however, she makes up for it by purchasing another mismatch skirt on the stand that sells nothing but mismatch skirts.

Now, there is the lie of the land to check: who’s selling what  (generally, this seems to be anything to make you look a bit hippy and – there’s no other way of saying it – weird), always an extraordinary number of hats of peculiar shapes and sizes, clothing of the natural cotton and tie-dye variety and, this year, furry tails(!). 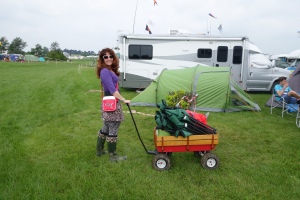 Accompanied by Dolly the faithful trolley – please see photograph – we investigate what foods can be bought, what unusual activities we can attempt and thereby endanger our health and well being – Bhangra dance for me, this time, which was rendered extra challenging for most of us because we were wearing wellies; now I know why young Punjabis tend to stay so slim. My son, Jamie has been a dedicated attendee of the African drum workshops and circus skills workshops, and Helen does everything, from yoga, to singing, to dance of any sort; occasionally she stops to breathe.

Our musical high spots have been Graham Gouldman of 10cc, who did an acoustic set with three other, excellent musicians, also The Real Thing, and Bad Manners, who’s manners are still bad, though rendered slightly tamer by the passing of years. I’m afraid we showed our own tameness by not staying out for The Levellers on Saturday night, because the volume is always increased so much for the last act on the main stage, as to cause significant potential damage to ears. We might go to music festivals, but we’re still lightweights.

My personal high spot, in the non music category, has been accidentally leaving a rather expensive camera and two hats in a marquee overnight on Saturday. When I went to look for it on Sunday morning it was still there, untouched on the chair I’d left it on.

Festival goers might be strangely dressed and a bit grubby (at least by Sunday), but there’s a prevailing sweetness of nature that gives one hope.

2 thoughts on “Been to a good GIMF lately?”