Without God’s grace we age like failing white goods, purposeless and ’in the way’ until we get dumped on the tip. But with God’s grace we become warriors, on the front line – where all the action is.

(the thoughts behind our song ‘Closer to You’)

OK. I give in, I admit it. I probably ought to get my eyes tested and accept that it’s time I started to wear reading glasses. I’m not sure if the resistance has been about vanity or about simple denial of old age. But now the inevitable is starting to get its own way.

I remember a time when I used to lie awake at 2.00am, worrying about the big issues in life, like death and old age. You know, the really big scary ones that can work you into a cold sweat when you’re supposed to be getting some deep refreshment to ready yourself for the rigours of the coming day. Now, if I lie awake at all, it will be to fret about such weighty issues as whether I gave the cat it’s worm tablet or to wonder if I will have time to pick blackberries for the freezer. Life seems to have moved on.

Which is strange, because old age and, presumably, death are looming a jolly sight closer than they used to be when I lay awake worrying about them. So what has changed?

Well, actually the answer is simple, in short, it’s due to my ever deepening faith in God.

I find that the more I see of this planet, the more I learn, the more I come to be confident that God is calmly at the centre of it all, watching me, loving me and keeping me safe. 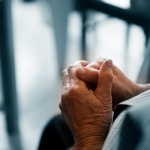 “I have told you these things, so that in me you may have peace. In this world you will have trouble. But take heart! I have overcome the world.”

As I say, ’safe’ is not about the journey, it’s about where it all ends – and, I don’t wish to spoil anything for you all, but I’ve sneaked a look at the end of the story – in the end, The Lamb wins.

We will grow old; the alternative is viewed by most as even less attractive, but, as we grow beyond our sixties, many of us will experience a gradual erosion of our self esteem. The modern western world is so inclined to assess our value by how much we earn, what we achieve in a commercial sense. That getting-out-of-bed-to-go-to-work thing has a huge impact on the sense of purpose, and hence, value of all of us.

I’ve been talking to some elderly friends who break the mould recently. Last night I spent the evening with Betsy, who, at 84 is a truly inspiring member of our church. She has had her full share of the ’trouble’ that is a part of living in the world – her husband died seven years ago and she lost a son to a massive heart attack eighteen months ago. I particularly wanted to speak with her because, last year when I was talking with some church friends about God’s continued purpose in our lives, Betsy said “and you know what? It just keeps getting better.”

She laughed when I asked her about this, and told me that if she compares herself now with the Betsy of twenty years ago, she’s grown; she trusts God more – she trusts that whatever pain comes her way, He will work through it with her, and it will be OK. She described peace, the presence of The Holy Spirit; and she also described her increased sensitivity to His presence and what He is asking of her. She hears his voice more easily.

You know that feeling of elation when God has asked you to do or say something to someone? You’ve been brave, done as He has asked you – and then seen from their face that He has used you so that He can work a much needed miracle? Well Betsy gets that all the time. Every Sunday in church, she will be sensitive to who God wants her to ’get beside’, and, every Sunday, she finds that she has been led to a person who specifically needs prayer, God’s encouragement and someone wise to talk to. 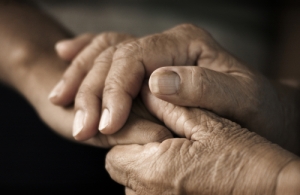 I also spent some time with my mother in law, Ella, who, at 79,  positive, energetic and determined to get the most out of life, is an inspiration in so many ways. But we weren’t actually talking about her, our conversation was about her Aunt Miriam. Aunt Miriam was a Methodist Preacher. She married once – to Harold – when she was in her late sixties. He was the love of her life. Four years later he died.

Ella told me that until Miriam was too old to ride her bicycle, she used to cycle round Sandbach, taking cakes, coal, medicines, you name it, if it was needed and she could fit it into her basket, she’d take it to someone.

I met Miriam once, in an old peoples home in Sandbach. It was a few weeks before she died; she was sitting in a chair, fast asleep when we arrived, and when she woke up her face was beaming with deep joy and welcome. She was 92 and utterly beautiful. The memory stays with me.

Two weeks later, she told Ella that Harold had visited her in a dream the night before, he told her he was expecting her to join him in a couple of days time; Jesus had also come to her and she was so excited, she was about to go home. She died peacefully two nights later.

God’s work thrives on the intercession of women (and men) like Betsy and Miriam, and across the world there are successful churches built on the bedrock provided by their unceasing prayer. Listening, obedient prayer warriors. They are at the very forefront of God’s work.

My ambition is that one day, I might become one of them.

Yep – horrible stuff is going to happen in life, a lot of it already has, but we are all so loved, and I have come to realise that, if I allow Him to, God will extract value and purpose out of my every breathing moment.

And then he will take me home.