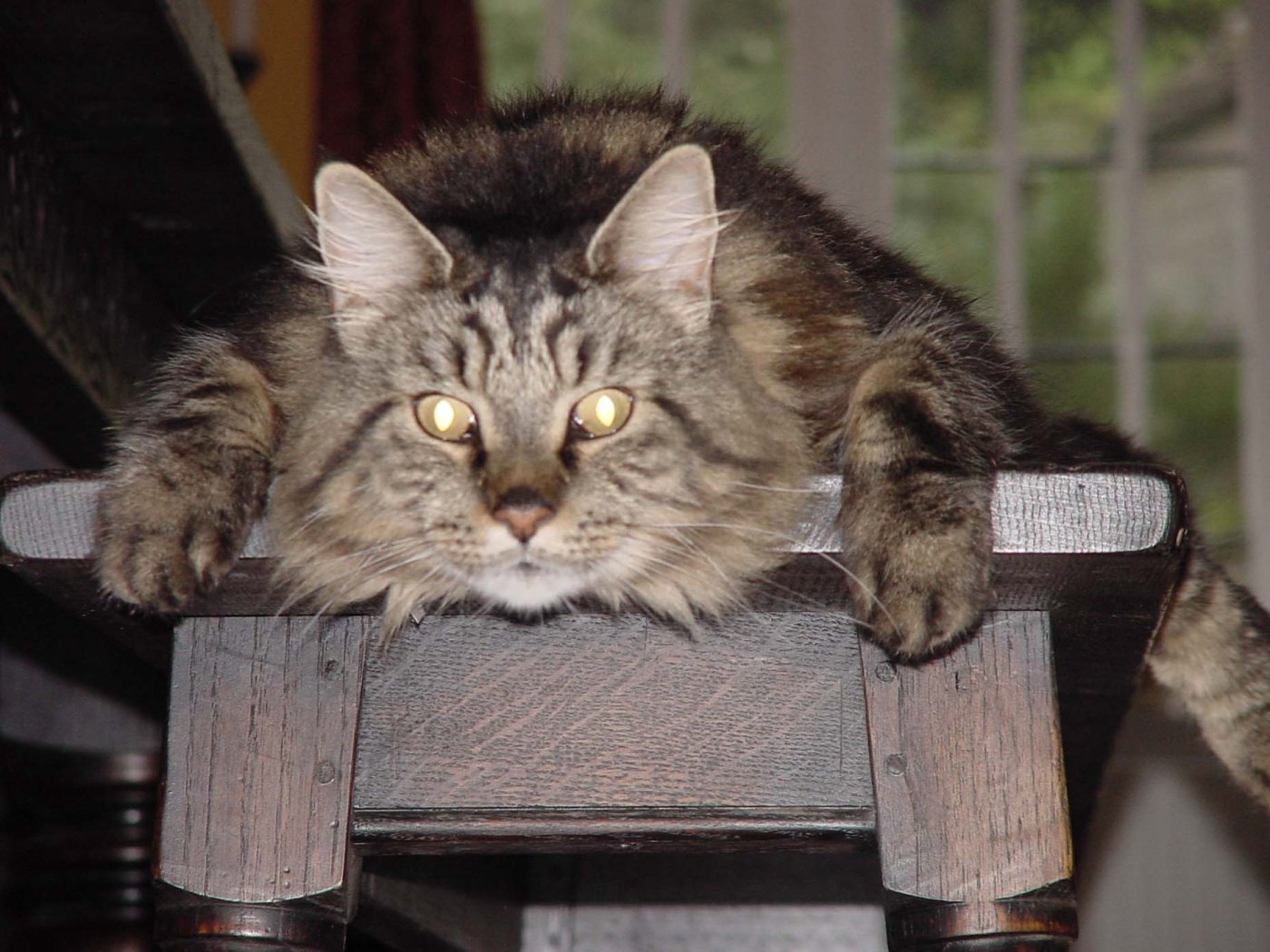 Well, first of all – you don’t, and nor will you ever. If you are rash enough to share your house with a cat, then he or she owns YOU.

Looking out of the window I see winter. The wind is blowing, rain is falling in that horizontal fashion that rain does when wind blows, and the trees have finally given up holding on doggedly to the last vestiges of what my grandmother might have called ’their foundation wear’.

Here by the fire, the cat is dreaming. He is curled up on the sofa looking – well – fluffy. Something Marcus is extremely good at. I know he is dreaming because, along with his snoring, which is surprisingly loud for a cat, his feet, whiskers, ears and the tip of his tail are all twitching furiously. It occurs to me that Marcus gets more active while asleep than he ever would while fully awake.

In the general run of things Marcus doesn’t do active.

He is a Maine Coon, and as far as he’s concerned, he’s royalty. He made it quite clear who was in charge on first arriving at our house, when the discovery that we had an Aga made us worthy of his presence and resulted in his decision to stay.

He is actually a rescue cat, and until he arrived and discovered the Aga, we were under the mistaken impression that we were choosing him. We now know different. I am staff, along with various assistants, Kevin and Jamie. It is our job to make beds, light fires, open and close doors, on demand, and provide food (no not that one, this one) in a timely and convenient fashion. We rarely come up to his expectations; as far as he’s concerned ’we came with the house’ and he seems to have reluctantly, but indulgently decided to ’make do’ with what he’s got.

Actually, for a cat of his breeding, he isn’t quite as regal as you might expect, not in the way some cats are, but he is lazy, and he is bossy. 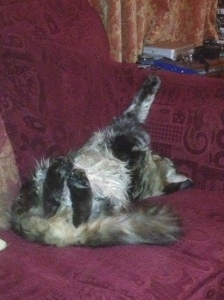 But he is also sociable. He is totally undaunted by invasions of visitors who come in large numbers for gospel choir practices, church meetings, Christmas parties etc. He simply chooses his target on these occasions, makes it clear that it’s his house and either sits on them, with  them in a companionable fashion, and often, inevitably, between them and the fire. If he is feeling exhibitionary, he will also lie on the floor in front of a carefully selected group, all four feet in the air to be admired. ’Is he dead?’ people ask anxiously, but no, he’s just doing his yoga.

Given the chance, he likes to sleep with people, sussing out and choosing his guest early on in the evening for later advances, just at the time bedroom doors were planned for closing.

But sleeping with Marcus is not for the faint hearted; we’ve learnt that it’s wise to make sure that our guests know what they’re letting themselves in for before they commit – we certainly wouldn’t let him in our bedroom – as at about four a.m., Marcus starts to talk – volubly and unceasingly, and he likes you to talk back. If you don’t oblige… politely and interestedly, he will simply assume you are either deaf or stupid and will talk louder until he gets the required response. And Marcus always wins. Let’s face it, when you are a guest in the house, and the cat in question is the size of a medium sized dog, with ten times the determination, would you have the courage to kick him out?

Mornings are a time of long established routine. If he has slept with a guest, he will emerge looking rumpled and, possibly, with the faintest suggestion of embarassment, after which he will go for a brief sojourn outside – no more than ten minutes, and none of it faster than a walk – just enough to check the world and make sure his territory is as it should be, after which he will wait by his breakfast dish, silently and with the politely affronted air of Queen Victoria.

Breakfast, once served however, is never eaten until the requisite number of household members have arrived downstairs. Marcus would never dream of touching a morsel until he has gone from room to room upstairs, yelling, to round up anyone who might not have surfaced yet. He will not return to his breakfast until the last person has arrived in the kitchen.

And then there’s Marcus and wildlife.

Our previous cats had all been a series of CPL rescues. All charming in their own ways, but all inveterate hunters. When the last one died in a road accident, I found Kevin strangely reluctant to join me in starting to search for a replacement, he said he wanted a rest.

It was all to do with the bodies.

The thing was, we had moved from house near motorway, to house in heart of some of the most beautiful and peaceful English countryside. Birds tweeting, bunnies hopping, small furry things doing what small furry things do – especially at breeding time – and our two urban cats couldn’t believe their luck. Examples of prime English wildlife would be brought in (how they got some of them through the cat flap defeats me), partially consumed, and the remainder would be left for Kevin’s bare feet to discover the following morning. There was something disturbingly mafioso in the way they arranged blood and entrails around the hall and kitchen floors – one almost expected death threats to be written in blood somewhere among it all. And when they discovered our colony of lesser horseshoe bats in the cellar we were starting to get very concerned.

So one might be forgiven for viewing the untimely demise of each of them, in separate incidents involving cars, as not being without its benefits.

But then came Marcus, and he was clearly different  We realised we didn’t have a born killer in our presence when Kevin found him sitting in front of the wood burner, side by side and enjoying the warmth, with a very confused but otherwise completely unharmed mouse. He has, over the years, continued to bring numerous ’friends’ in, all equally unharmed, all to be rounded up and returned to the great outdoors from whence they came.

Maine Coons are known for seeing hunting as being a rung or two beneath their station in life. You will occasionally see Marcus stalking through the undergrowth in the prescribed manner, but with a vaguely perplexed expression on his face, as though he’s just picking up the echoes of some, long buried,  and perhaps, vaguely shameful instinct that he doesn’t understand and suspects should be suppressed along with other bits of behavior that aren’t ’quite nice’.

So he snores. And hunts the great Savannah in the unembarrassed peace of his dreams.

And long may he do so.