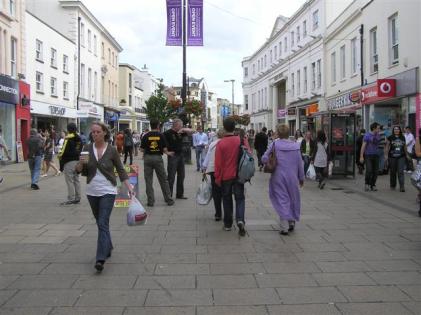 I’ve met the guy several times, bought him a coffee and a bacon sandwich, and had a chat with him. He seems like a nice enough guy, tells me that he was in the army and pensioned out after injury, tells me that he’s made mistakes and got what he deserved, but that he’s sorted himself out now and is on the right track. I’ve always liked him, and I figure there’s obviously stuff that’s gone wrong in his life or he wouldn’t have been homeless. He’s nice to chat to and I’ve been enjoying the gradual getting to know thing. There but for the grace of God…

This time though, when I offered him a hot drink he refused it, saying that he’d far rather have a couple of quid towards his gas bill.

Now, I should say that I never give money in these circumstances. I buy the odd ‘Big Issue’, and I give food, drinks, socks, gloves – but never money.

Money buys drugs and alcohol and should be avoided at all costs.

But I found myself giving him a few quid, I told him that I never give money, but him I trusted. We smiled at one another, he thanked me, I touched his arm and said it was a pleasure. I walked on, he carried on selling Big Issues.

Then I went to the hairdresser for my three monthly trim. We chatted like one does with one’s hairdresser, and my guy on the street came up, at which my hairdresser’s normally cheerful face turned stoney.

“Let me tell you about that particular man..” he said.

He told me that my guy had never been in the army, that his disability was as a result of diabetes. He said that this wasn’t a nice man and that he wasn’t to be trusted. He told me of strong prescription drugs, provided free by the NHS but now being sold on the black market, he told me of manipulation and corruption. He named names and gave convincing evidence.

He told me of someone who makes fools of silly, naïve, middle-aged women like me.

Over the ensuing week I couldn’t put the episode out of my head; I endlessly planned what I should say to him; should I be angry and self righteous? Should I quietly let him know that he’d been found in a lie?

And then today, walking along the street, I saw him on the other side, selling his Big Issues.

I just avoided him. Kept my eyes straight ahead. No offer of hot coffee, no friendly words, no bacon sandwich. And certainly no help with the gas bill.

I didn’t give him another thought.

Until looking back on my day during prayer.

Stuff to be grateful for – multiple things.

Stuff where God had been blessing me – loads of it.

Stuff where maybe I hadn’t been as good as I could have – and with a sense of gentle reproach I remembered my guy on the street.

“I’m not quite sure what I should have done there Lord” I prayed. “I think I could do with your wisdom please, Father – what should I have done?”

The answer was palpable enough to be virtually audible:

“You should have shown kindness. Always show kindness”.