When we were in Holland just before Christmas, we were giving lots of our little grey boxes of ash away; we talked about ash being what’s left when everything else is used up and burnt out, and we told this story:

A young Jewish boy (for these purposes, we’ll call him Asher) wanted to hear Jesus speak. So he got his mother’s permission to go down to where he’d heard Jesus was going to be. His mother allowed him to go, but with strict instructions regarding the importance of being home before sunset, and how he was to be careful, stay safe and not get into trouble. She also sent him with a small packed meal of fish and bread.

He was so excited – he’d heard that this man, who performed amazing miracles and, unusually, who had time for children in a way that grown ups rarely bothered with, was not far away, on the shore of the Sea of Galilee. The day exceeded even Asher’s childishly optimistic expectations, and the boy sat taut with anticipation, among a huge crowd of people, each one straining to hear every word that Jesus spoke, and to miss absolutely nothing. 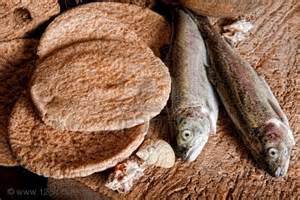 After a day of sitting in the baking sun, there was some discussion among Jesus and his disciples about the fact that everyone present must be hungry, because they’d been there such a long time. Asher had reluctantly been deciding that he probably ought to be heading home, but now Jesus sent the disciples among the crowd to ask whether anyone had brought any food with them. Most people had nothing, but Asher’s enthusiasm took over, as he shouted out excitedly ‘I’ve got some!’.

He was called forward to present what he had to Jesus. two fishes – five loaves.

Looking around at the enormity of the crowd he suddenly felt foolish. What use could the little bit he had possibly be. Someone sniggered in the crowd, and then someone else sent a mocking remark. What on earth had possessed him to stand up and make such a fool of himself? What he had brought with him was going to go nowhere in the face of such a huge crowd of hungry people.

He hung his head as he was called forward, trying to be as small and as unnoticeable as possible as he obediently wove his way to the front of the crowd to meet Jesus. Resentful, mocking eyes were on him. One useless boy, two fishes, five loaves, five thousand people.

But then he found himself at the front of the crowd, looking into the impossibly kind, unbelievably wise eyes of Jesus Christ.

We’ve all felt like this small boy, so many times. Weak, useless and laughably ill-equipped for the task at hand.

But what Asher did next is exactly what each of us needs to do. He looked into Jesus’ eyes, and put everything he had into The Saviour’s hands. A step of faith.

And Jesus performed a miracle. Just as he will with each of us when we are ill-equipped, but are prepared to take that step of faith and hand everything over anyway.