I never cease to be amazed at how God loves to bless us.

There are times that He comes through for us when we’re desperately in need – like when a single mum friend of mine couldn’t find the money for her severely damaged front door. A few church friends, who knew there was a financial problem, decided to hold a collection to give her a bit of help. What we didn’t know was exactly how much money was needed, so when she opened the envelope of cash and found exactly the right sum for the bill, to the penny, we all knew that it was God coming through for her, rather than us..

And then, there are those times that there’s no desperate need, but He just wants to delight us with His blessing and affirmation.

At the end of March, we were booked into a great little café called Smokey Joes, to shoot a video for our song ‘What Love Can Do’, (other cafés do exist, but not quite like this one). All sorts of talented people were giving their time, and we wanted to do it right.

The outfits for the girls were sorted already, but we wanted to find something equally suitable for the guys in the band. Our era for the video was kind of ‘fifties’, so the obvious thing was to find ‘Teddy Boy’ drape jackets, drainpipe trousers and crepe shoes. Fine in principle, until we started investigating hire costs. It wasn’t going to work.

It occurred to me to talk to a local wedding hire shop, who’d helped us deal with school dances in the past. A quick phone call was all that was needed for the manager to establish in his mind that he wasn’t going to make much money from us, but even so, he started thinking of ways he might be able to help. He asked if I knew what Nehru jackets looked like, told me that he thought he might have some unwanted ones in the stock room downstairs, and that if we wanted those, we could either hire them or buy them absurdly cheaply.

So I went off to google Nehru jackets, and he went off to find out what he actually had in his stock room.

Ten minutes later, I’d found pictures, and he’d phoned me back to tell me that they only had three in the stock room after all; the others had been sold off. My disappointment must have been palpable over the telephone, because he then suggested that there was, after all, just a small glimmer of hope that he still had some others in his garden shed at home – what kind of garden shed does this man have?! He promised he’d check over the weekend and call me back on Monday.

Well, Monday came along and I’d spent the weekend fruitlessly scouring the Internet. I now knew that the men in the band needed every size from 36 short to 48 tall and various random sizes in between.

At 9.30am on Monday, I received a phone call from Nigel at the hire shop (first name terms by now), telling me that he’d found a further six jackets in his shed. He listed the sizes he now had and, amazingly, in spite of how few jackets there were, and the wide variety of the sizes I needed, he actually had them all, with an extra unwanted 44”. The chances of all the sizes being met had seemed so remote, but here we were.

I collected them on Tuesday, they were tried on, and they all fitted perfectly. Thank you Lord. 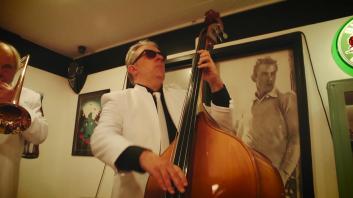 And then, in the post on Wednesday morning, quite out of the blue, we received a cheque. Now, I’d like to stress the point that we’ve been so blessed and provided for in so many ways, and gifts of money through the post have, previously, been neither received nor expected. But now, here we were, with a cheque in our hands, accompanied by a note to tell us that they had decided that they wanted to bless the Out of the Ashes ministry.

The amount was, to the penny, exactly right for the full purchase of all of the jackets.

God has blessed us, well beyond our needs or expectations. He’s an amazing, loving father, who likes to be involved in every aspect of what we’re doing. He loves to bless us, just as we love to bless our children, with unexpected gifts – sometimes big ones, sometimes small ones, and always astonishing and precious.

So, when you see OOTA play, or look at the video of ‘What Love Can Do’, and you see those white Nehru style dinner jackets that the boys are wearing, just remember – God provided those.

Or you can put it all down to coincidence, and you’re probably right. But as J.John so aptly puts it – when we pray, coincidences happen. I think it’s all down to love.

One thought on “White Jackets…”