Why can some of us hear God speaking to us, while for some of us there is nothing but silence? Why do some of us find worship exciting and joyful, while for others it’s just part of the routine that we have to get through on a Sunday morning?  And, actually, why do so many women come to church alone, because men just do not ‘get’ Christianity?

Last Saturday, a Women’s Day was held at our church. It was a really special day, full of love, kindness, prayer, great teaching and, of course, chocolates.

During the lunch break, a group of us had decided we would offer the washing and massaging of feet and hands as we prayed for people. We came in the morning, armed with towels, bowls, scented soaps and plenty of cocoa butter for massaging into tired feet and hard working hands. It was the nicest thing to do. I love spending time with other women, we all have such stories to tell and are capable of such compassion for one another.

But, oh boy, can we be bad at receiving! I was amazed at how uncomfortable so many people were with someone kneeling down and massaging either their feet or their hands, and praying. It led to some great conversations. We discovered that an awful lot of us feel very awkward about being given anything at all, we cringe at the thought of going forward to ask for prayer, even when we are really in need; I forgot to take a packed lunch with me, and I had to prod myself to say ’yes please’ to someone’s profered tuna roll.

That bended knee thing seems to have become really hard. Both men and women have now created such a fortress of self reliance and a fear of being beholden to anyone that it has become nigh on impossible for us to ask for or to accept anything.

Today, I heard of someone who lived homeless, in London, for eight months without telling a single one of his friends, his family, or indeed, his church community that he had nowhere to go. He simply couldn’t bring himself to ask someone for a space on their floor or a spare bed – to risk becoming one of ’the needy’ in the eyes of others – and so, he made the best of hospital waiting rooms, public loos, underneath bridges and doorsteps rather than risk telling anyone that he had nowhere to go.

I guess that admitting we need help feels weak, exposed, too much at risk of looking as though we’ve failed in some way. Putting ourselves in a position where we are prepared to receive, is too vulnerable, too hard a place to go.

But go there we must. If we want to experience the wonder of an intimate relationship with God, feel His presence, hear Him speaking to us, then we need to be able to submit to him, to give it all up. To be vulnerable.

Then, and only then will we discover the true depth of His love for us and how far He is prepared to go to keep us safe.

The assumption that anyone who is a Christian must be a wimp is rife among non-believers; however, I have a nasty feeling that fear of ‘wimpdom” is also significant  among those who profess to believe in God. Hence, ’theoretical Christianity’ is prevalent; where we attend church regularly and go through all the motions, doing all the right things, but haven’t submitted fully enough into Christ’s dominion to receive the full benefits of the Holy Spirit.

Maybe that takes a bigger step of faith than we’re quite prepared to take.

I’ve been speaking to people about their journey to Christ in the last few weeks, and, among men particularly, the vast majority either gave their lives to Christ when they were still young enough to have not yet developed an unhealthy degree of self reliance, or they had reached such a desperate state of affairs in their life that they were finally, literally, brought to their knees.

Hence, whilst many men and women are comfortable with Christianity per se, it all tends to remain a bit theoretical if we don’t get to receive the Holy Spirit –  and that can only happen when we empty ourselves of our expectations of what we think is important so that Christ can fill us up with something better.

Well, statistics indicate that men won’t go to the doctor, read instruction manuals or ask for directions, so they were always bound to struggle, but, actually we women aren’t much better.

Considering ourselves as ’sinners’ seems a bit grubby, maybe it feels a bit old fashioned, I don’t know. Either way, there are still an awful lot of us trying to get to heaven by ‘good works’ rather than Grace. One thing I do know is that until we grasp it, ’get’ that that is exactly what we are, and learn to bask in the wonder of His Grace, we’ll never realise the full joy of God’s closeness.

We need to come to terms with the fact that, no matter how upright we are as members of the community, men and women alike, church leaders, church cleaners, doctors, drug addicts, barristers, burglars, titled servants of the realm, homeless and
heartbroken. We might be pillars of the community, or we might be struggling to find a roof for our own head, we are equally failed and broken before God. 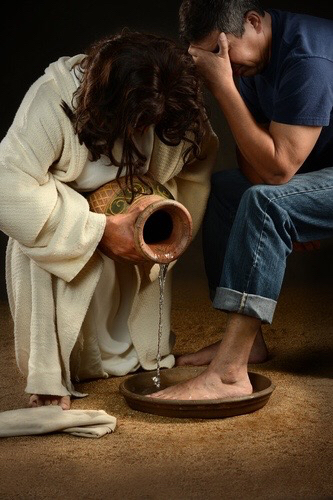 So. If you are reluctant to get your feet washed or to ask for prayer, if someone laying hands on you has your skin crawling, then, I wonder, are you correspondingly missing something in your relationship with God?  Has it all become a bit dry and theoretical?

If so, you might like to try this prayer. It has it’s roots in the Orthodox Church, where, I  admit, I would rarely go to look for prayers, but, as someone put it to me, it’s an extremely ‘muscular’ prayer, with every word loaded with meaning and value.

‘Lord Jesus Christ, have mercy on me, a sinner.’

While you’re driving to work, on the train, in the shower, eating lunch, lying awake at night… keep praying it, slowly, thoughtfully, reverently. Make sure you are meaning every word.

Try to repeat it about a hundred times a day (yep – I really did say that), and, if you’re anything like me, the process could take about six weeks or more.

Be prepared for the long haul,  learning to receive is not the work of a moment.

Then, be prepared for a whole new, more exciting, enriching, wonderful journey with Jesus Christ.